Since yesterday, refugees arriving on the Greek islands have been detained to have them ready for deportation. They don’t know what’s happening to them, volunteers are mostly banned from assisting and the police doesn’t have instructions on how to register and manage the new arrivals. Now they must wait behind barbed wire fences, because Europe was in a hurry to stop them coming. The police doesn’t know how to take their asylum requests, which breaches the refugee convention, and the UNHCR has told the EU that the authorities have crossed a red line; it won’t deliver refugees to them anymore.

We went to the Vial hotspot in Chios today with biscuits and sanitary products, throwing them surreptitiously over the fence. People grappled for them and jumped after them. “We are hungry, especially the children,” one inmate told me. They get three meals a day, but there’s no shop or open kitchen for them if the food is insufficient.

A social worker in the camp said nobody knew what to do, today had been a haze of stress and confusion. The army, who previously ran the camp, had left. Most NGOs had been thrown out. All procedures and even basic knowledge about where things like keys were kept disappeared with them.

When we asked what their thoughts about the future were, some refugees beamed and pointed in a random direction. “Germany!” they shouted happily. We tried to explain that the new EU-Turkish agreement made that extremely difficult and complicated. It was designed to stop them from doing exactly that. They would first of all have to apply for asylum in Greece. They looked at us in disbelief. 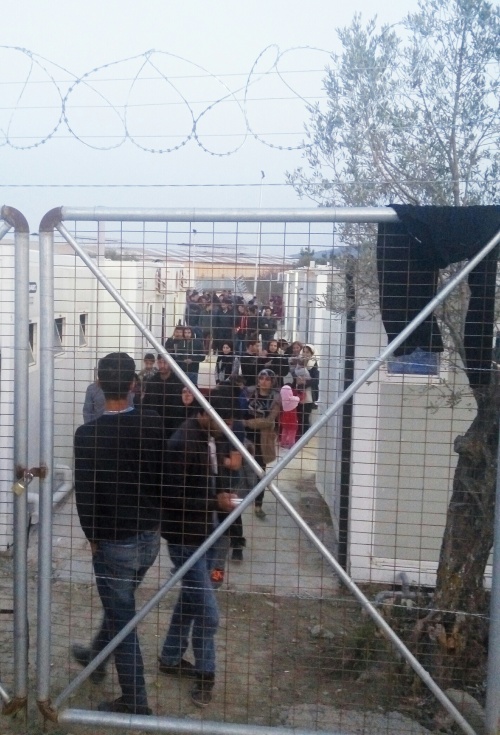 This was just the beginning of a long and heartbreaking discussion. We tried to tell them what we knew about their situation without inciting a riot, which would ruin their already slim chances of staying in Europe. But they were clearly disappointed, sad and angry.

They told us they got neither the opportunity nor permission to buy SIM cards, so they can’t keep in touch with their families, and they don’t have electricity and only a limited internet connection. They were not just imprisoned, but isolated.

That isolation was perfected when two policemen came in a pickup truck and asked us what we were doing. We told them we were talking with the refugees. The policemen told us to go away. We promised we’d come again with SIM cards, food and water. And the prisoners asked us to tell the world what was happening.